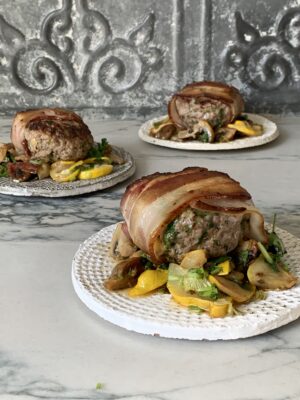 It started with some pork mince I had in the fridge and what to do with it, that these cheesy bacon and pork parcels were created.  My caveman loves meat and this to him was the perfect breakfast. A pork rissole with a cheesy centre then wrapped in smoky bacon. I served it with yellow squash and mushrooms but you could easily put this in a bun as a burger or serve it with a salad.
Now there have been a few people requesting the recipe on Instagram and Facebook. I never share something I have just created as I need to remake it to make sure it is consistent. There is nothing worse than making it and it not working out.
So today I remade the recipe and yes it is consistent in every way . Originally I had only enough mince for 2 rissoles and this time I have doubled the recipe to make four rissoles. If you only want two rissoles then halve the recipe. For us, one each is plenty as a meal served with vegetables and or a salad.
Now I have used Szechuan  pepper also known as Sichuan peppercorn.  If you can’t get it or don’t like it then you can substitute with a blend of 1 teaspoon black pepper and 1 teaspoon ground coriander seeds.
And whatever way you choose to eat these cheesy bacon and pork parcels I’m sure they will be well loved by all and become a family favourite. Enjoy! 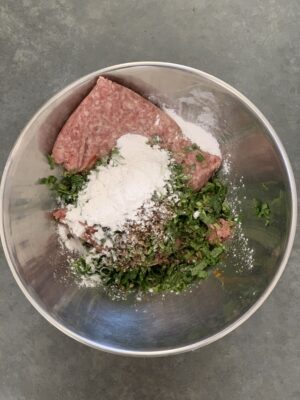 Divide the mixture into four equal sized portions.  Poke a large hole in the centre of the rissole and stuff with a slice of cheese that has been cut up into pieces so as to fit. Cover over with the mince and shape into a ball, flatten top and bottom of rissole so it will wrap better with them bacon. Make all the other rissoles the same way. 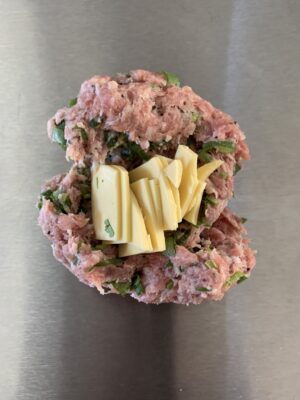 When you have finished stuffing the rissoles it is time to wrap in bacon. My homemade bacon is short slices so I join 2 slices together at the tail end to form a long strip. Put the rissole over the join and fold over each of the flaps press down gently and set aside and continue with the rest of the rissoles. 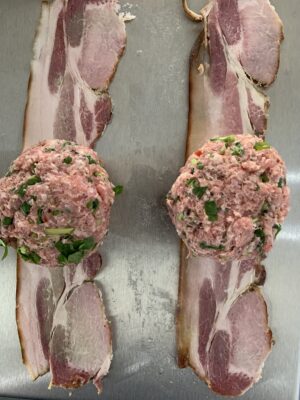 Heat fat in large frypan over medium-high heat.  Add rissoles to the pan allowing space between each.  Cook for 3-4 minutes with lid on then turn over. 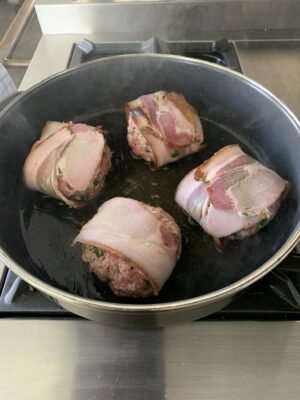 * If serving with squash and mushrooms then add these to the pan now. 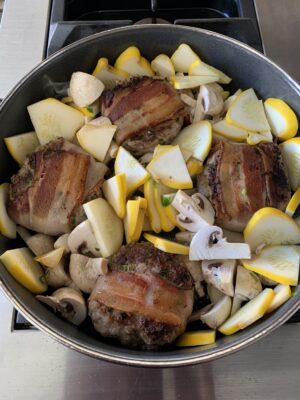 Cook for a further 3-4 minutes, stirring. Sprinkle with salt, pepper and coriander, stir through. 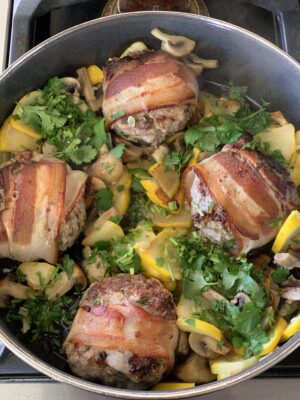 Plate up and serve. 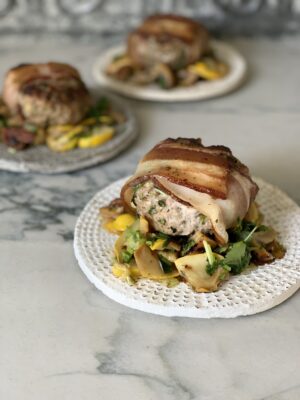