Ever since I first tried Bircher Muesli a very long time ago I became a huge fan of it and had made it on a fairly regular basis, that is, until I went paleo and cut out all grains including oats. It was then that I decided to try and re create a paleo type of bircher and yep it worked,  really well too. The other day I purchased Paleo Pure’s Power Porridge online from Simply Nero. I thought I would give the Choc Maca Nana flavour a go and so instead of making porridge the first thing that came to my mind was Bircher muesli, and here it is….Choc banana bircher muesli, made, eaten and now sharing  the recipe with you.

The beauty of bircher muesli is that you mix everything up together the night before, then serve the next morning.  Great for busy weekday breakfasts when we are on limited time schedules. It’s nutrient dense so a little goes a long way and with  the goodness of almonds, chia, coconut, cacao, maca and banana chips what more would you want or need. 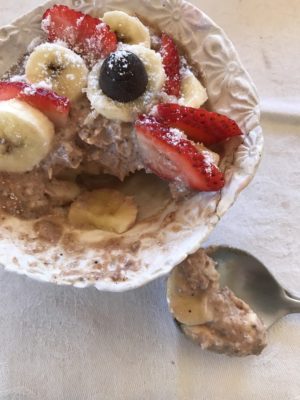 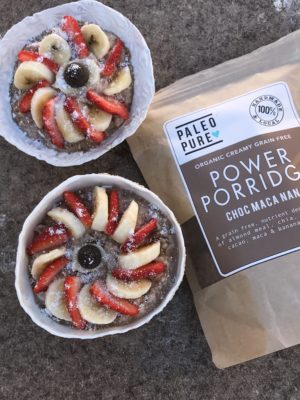 Put the power  porridge, coconut water, coconut yoghurt and vanilla extract into glass container with a lid. Stir  the mixture until it’s well combined, then put the lid on and  refrigerate  until the morning.

Stir mixture and divide evenly between two bowls.  Decorate with banana slices, strawberry slices, chocolate, cacao nibs, or anything you like. Add maple syrup if you need it sweetened. Serve. 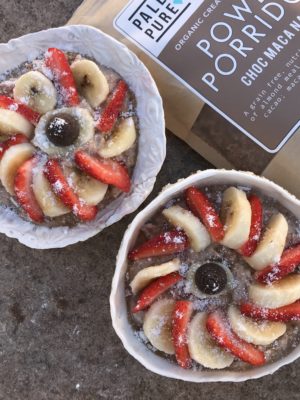