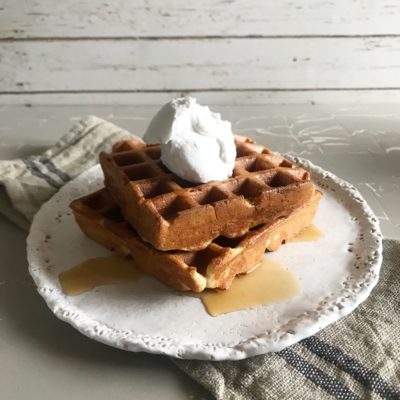 Classic Vanilla Waffles
Waffles, have you ever tried them?  It’s been a long time since I have been able to eat them, that is, those made with wheat.  It’s been an even longer time since I have owned a waffle iron or press.
Back in the day, about 8 years ago, I had a cheap waffle machine and I have to admit the waffles were ok but nothing to brag about.  I have been wanting to buy a decent one for quite some time.  It’s a false economy to buy the cheap type as they break down or don’t cook properly.  And yes, I have noticed some very tanned waffles pictured on Instagram.

Now it took me a few years but I finally purchased the Breville waffle maker and this thing is brilliant. And just so you know I am not sponsored by Breville and I am not getting paid for this either.
My first encounter with a Breville appliance was a food processor that lasted over 20 years. So if this waffle maker lasts half that time I think I would be happy with that. Now this machine somehow works out the moisture content and adjusts the time accordingly.

It doesn’t need oils or sprays as the waffles don’t stick. And each batch turns out perfect. No burnt or overly tanned waffles, no waffles broken because they stuck to the plate, just perfectly formed, easy to take out, crispy waffles. The only thing I can fault it on is that it should have come with a half cup measure instead of the 1 cup.  That’s alright I won’t hold it against Breville for this minor fault!
And what is even better is you can freeze the waffles for later!  They are easy to reheat and taste great. They are grain, gluten, dairy and egg free. I love their versatility. Waffles are not just for dessert, they can be for breakfast or a light meal. The combinations are endless and I am so in love with them.
As I have said a number of times I am trying to keep my nut intake as low as possible for fear of developing an allergic reaction to them just like I did with almonds and pistachios. They are egg free, so I follow basically a Paleo lifestyle but they also are suitable for Vegans.

And as I said earlier topping choices are endless.  Sometimes I like coconut yoghurt, berries and maple and there have been times I have even topped it with salad and beef bolognese sauce.  Happy waffle making and I hope you will love them as much as we do. 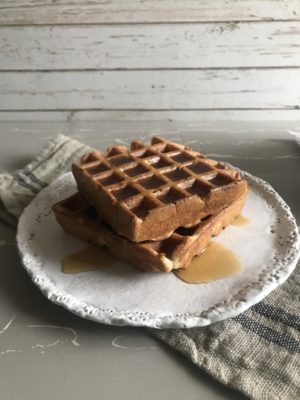 In food processor bowl add the cashews and process for 5 seconds to break them up.  Add cassava flour, arrowroot, baking powder and flax meal and process till fine crumb.

Heat waffle machine and cook according to manufacturers instructions.  I use half a cup of batter per square in my waffle machine which has 4 squares. My machine takes 4.45 minutes to 5.15 minutes per batch. 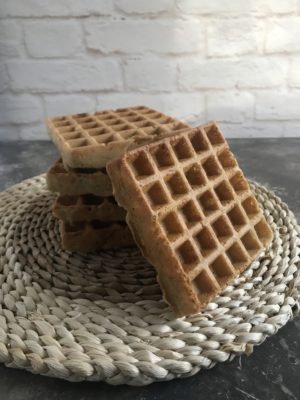 I tend to take mine out of the freezer and put them into the microwave for 20-30 seconds. I then put them under a griller to crisp up, turn over and crisp the other side.  Serve with your favourite topping or eat plain. 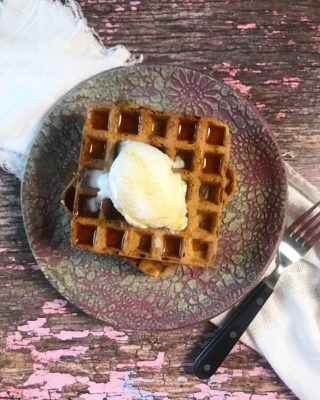