Mulberry Munchies
Yesterday after I had got the caveman fed and off to work, I sat down with my bulletproof coffee and flicked through some of my recipe books(my own, unpublished, hand written copies).
I was in a baking mood but not sure what I felt like making or eating. Mind you I hadn’t had breakfast yet either and I had an appointment at 11 am. Plenty of time as it was only just before 9 am and I had an hour or so before I had to leave.
I needed inspiration, and quick. Then from the corner of my eye I spotted  a bag on my kitchen bench.  The day before I had purchased a bag of  Pumpkin Seed Meal on my travels to Geelong. Hmmm, I think l’ll make some cookies. And thats how it started with these mulberry munchies.
So into the food processor went all my ingredients, and the oven was turned on.  I scribbled down the recipe into  one of my notebooks where I’d found an empty page . I blitzed the ingredients and then started to roll them into balls. Into the oven they went and then I realised that I had turned on the hose to top up my fountain.

I had to make sure that I didn’t overfill the fountain, poor goldfish.  So out I ran to turn off the tap, need I say the goldfish were swimming around quite happily oblivious to mumma Dory brain (ever watched Finding Nemo?) When I had walked back inside I was greeted by the most delicious smell….those mulberry munchies cookies!
So I opened the oven right on queue with the buzzer, and pulled the tray out.  Well there was no waiting for them to cool down, no, no, no, the smell was dancing around my nose and arousing my senses, and as for  me and my  ‘no self control’, I picked one up, broke it in half and took a bite!
Oh me, Oh my, they were crispy and light with just the right amount of sweetness and the taste of mulberries and sesame. I was in love….”These are my new favourites” I proclaimed to Ruby, our Golden Retriever, who lay on her mat, asleep and oblivious to what I was ranting on about.
I had better cool these cookies down, so that I could bag them up and take them with me to my appointment! I was going to try and be early(for once) ha, ha, ha!! Well I had my shower, got ready, bagged up the cookies and off I went.

I got to the clinic and handed a bag of cookies to Jess at reception, she looked at me and said “you don’t have an appointment today “and I looked at her quite stunned.  Like I said I have a dory brain.  Monday was a public holiday and my whole week felt muddled up.  It was  Wednesday but  this brain of mine was thinking it was Thursday.
Oh well,  we had a laugh and I left. Well when I got back home there were only 4 cookies left  and I still had to share with my friend Stephanie and my caveman Nick. So  there you go all the cookies are  gone, just a memory from yesterday, but I am going to make another batch tonight.
They are quick and easy to prepare and cook, and in under 15 minutes you have 20 cookies ready to be munched – try stopping at one! And they would be great to pack for school snacks as there are no nuts. Win, win I say, that is unless you don’t want to share, and after all who could blame you? Not me, says she who has no self control.

Roll heaped tablespoons into balls and then flatten between your palms. (if mixture feels a bit dry and crumbly, don’t stress just knead it in your hands to soften. Place on trays, leaving space between each of the cookies.

Place trays in oven and bake for 8 – 10 minutes.  Cookies should be golden around the edges. Remove trays from oven.  Put cookies onto wire cake cooling rack  to cool down. 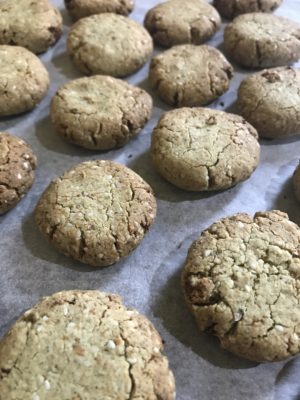