Since being diagnosed with an autoimmune disease I find intermittent fasting works for me in that it takes some of the pressure off the inflammation in the gut and for my first meal I like to eat a smoothie bowl. It is soothing and feels light. No heavy painful tummy for this little black duck. So it’s because of this, I feel the need to create lots of different smoothie bowl recipes and this Pumpkin Pie Smoothie Bowl is plant based, vegan, paleo  and just so special.
Pumpkin and pumpkin pie are synonymous with winter and there is nothing more delightful to the senses than the smell of pumpkin roasting or a pumpkin pie baking in the oven with hints of cinnamon and nutmeg wafting in the room.  And in the warmer months we can still delight the senses with a cooler version of that pie and no needs for feelings of remorse. Not to mention that besides pumpkin being highly nutritious its packed with vitamins and has a high antioxidant content too.
I like to roast pumpkin , peel it, deseed it and cube it. It’s great to freeze in a flat layer on a tray then transfer it to a plastic zip lock bag or container. This way they shouldn’t stick like a lump, but also it is ready to use, whether for a smoothie, smoothie bowl even for salads or anywhere you can use roast pumpkin. 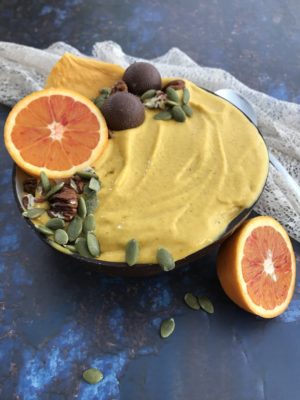 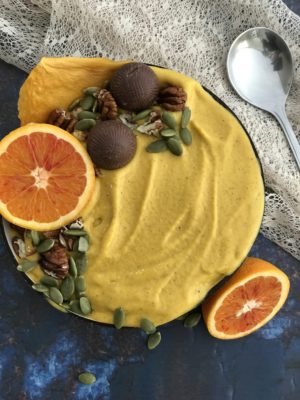 Scoop mixture into a bowl, top with your favourite toppings and serve. 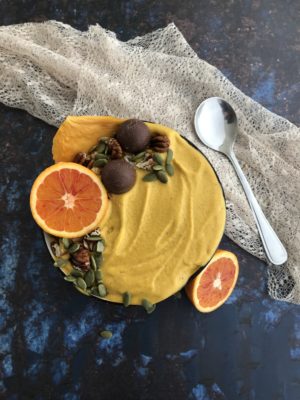